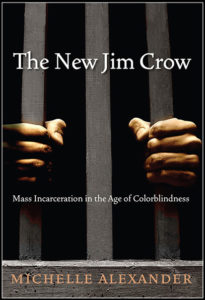 In her book, The New Jim Crow, Michelle Alexander argues that the criminal justice system in the US functions as a system of racial control as oppressive as any in the segregated south of bygone eras. In her opinion, it does so even while claiming to uphold the law impartially and in a completely colorblind way.

Her claims certainly ring true in some areas of the country, such as Ferguson, MO. In this small town of 21,000 people, over 16,000 of them had outstanding arrest warrants, 92% of which were issued against African-Americans in 2013! This is a particularly shocking example (which thankfully has been recently annulled), but one can see Alexander’s thesis at work in other parts of the country as well.

We can see it even in our own liberal bastion where our well-trained police forces are dedicated to the concept of Fair and Impartial Policing.

In 2015, Athens for Everyone began looking into claims of racial disparity in marijuana arrests and in a story just released by the Flagpole, Joshua Eaton shows there is a wide racial disparity in the arrest rates for marijuana possession here in Athens. In fact, data obtained in an Open Records request by Athens for Everyone and Flagpole “show that blacks are 4.7 times more likely to be charged with a marijuana violation in Athens.“

A disparity also exists in the seriousness of the crimes charged against whites and blacks, not only in the number of charges made. The Flagpole continues, “The largest racial disparity, by far, was in arrests for possession of marijuana with intent to distribute. Nearly 77 percent of those ACC police charged with intent to distribute between 2012 and 2015 were black.”  Normally possession of less than an ounce is a misdemeanor, but it can be a felony if the police suspect intent to distribute.  This can make an existing inequality in arrest rates much more severe.

So, what can be done to correct the disparity?

Athens for Everyone believes that our drug laws need to be revisited and changed, with serious consideration given to decriminalization county and state-wide. Decriminalization of marijuana in Athens seems to have support in the Commission (Melissa Link and Jerry NeSmith in particular have voiced public support) and also from the Mayor, at least based on comments she made during the last election cycle.

Does Georgia law even allow cities to decriminalize marijuana on their own? Mayor Ted Terry of Clarkston, Georgia believes we can by using a parallel ordinance, and is putting this to a vote as early as next month. A parallel ordinance would allow police officers to issue a ticket instead of making an arrest while not directly contradicting the harsher state law. If instructed by the police chief, Terry believes the police and prosecutors would go along with the county’s wishes for decriminalization and would no longer use the state law.

According to the Atlanta Journal & Constitution, “Clarkston Mayor Ted Terry said the council’s public safety committee this month will review whether to make possession of less than one ounce of marijuana a ticket-only offense, putting it on the same level as a run-of-the-mill traffic violation. He expects the full council to bring it to a vote as early as May.” 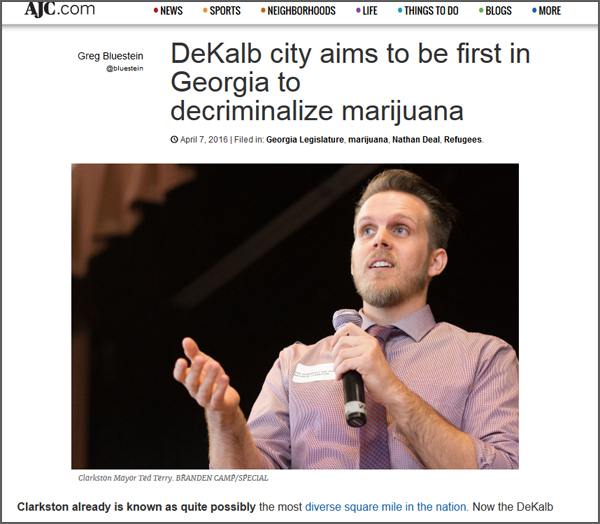 Ted Terry represents the kind of bold, young leadership Georgia sorely needs as we progress through the 21st century. We can no longer suffer outdated laws intended to incarcerate anyone for a lifestyle choice, especially when these policies cost us large sums of taxpayer dollars and misdirect our police resources. Furthermore, if you view these laws as a system of racial control as does Michelle Alexander, then there is an urgent moral imperative to overturn them as soon as possible.

To the Mayor and Commission: We understand that State law sometimes trumps your good intentions and makes it impossible to act.  However, if Clarkston proves that decriminalization is possible, we expect that you will act likewise to protect our residents and taxpayers from unwarranted and unjust incarceration.

In response to the Mayor and Commission’s work session on Wednesday, March 20, where criminal justice was addressed, we would like to […]

As we fight to dismantle the prison industrial complex and the carceral state, one small step we can take toward a more […]

It’s time to tell the ACCPD we do not support its officers’ use of excessive force! After an investigation into the July […]