These grades result in part from an objective assessment based on votes taken in commission meetings and how they align with A4E’s official position on specific issues. Not being present for a vote does not count for or against one. We then discussed these objective results and added subjective components, such as public statements, perception of priorities and stated stance on issues including the Linnentown Resolution. They do not reflect the decisions of the mayor and commission with regard to COVID-19, which we have generally found to be sound and humane, especially in contrast with decisions on the state level. 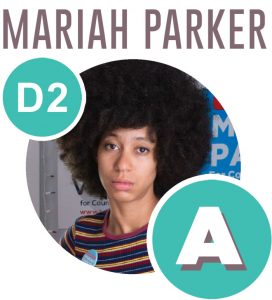 Mariah has been everything that District 2 elected her to be in 2018’s special election. She is a fierce voice for policy changes that are already improving the lives of her constituents and all of Athens. She’s been key to passing an end to cash bail for local offenses and in advocating for the rights of Black and brown people. She has been consistently insightful and looked for places where measures can be adapted to serve her district and all those who have been most harmed by Athens’ racial and economic inequality.

When others block the passage or implementation of just policy, she hasn’t been afraid to tell the truth about what’s standing in the way, as when Solicitor General C.R. Chisolm declared he would not implement a local ordinance decriminalizing marijuana or in her fiery condemnation of commissioners who claimed they supported redress for Linnentown while rejecting the concrete proposal coming from the very people affected.

We’d also like to highlight Mariah’s “District 2 News” as a great example of putting extra effort into political education and keeping the community informed of consequential things transpiring in their local government. 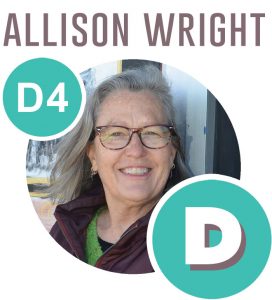 Disappointingly, Allison has not sided with the new slate of progressive commissioners elected in 2018 and often opposed their efforts to make substantive change. She was not present for several important votes, including the one to remove cash bail for violations of local ordinances, so we do not know how she would have voted on them, but objectively, based on her votes in 2019, she would receive a D from us.

This grade feels fair. Allison pushed to make ACC’s ask of the local legislative delegation more conservative, ignoring the fact that pushing for transformative change is crucial. She has focused on process over big ideas, and when she has voted in accordance with our preferences, none of those votes were risky. Allison works hard and she cares about what she does, but we would like to see her stand up for something more important than e-scooter ordinances. The fact that she names those and stricter penalties for alcohol ordinance violations as her two legislative priorities over the next year is extremely concerning. 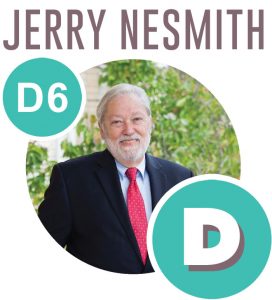 In past years, Jerry NeSmith was sometimes an ally and sometimes an opponent of A4E’s policy goals. He deserves credit for being on the right side of the AADM-led fight for an Athens Civil Rights Committee and for good votes on environmental issues in particular.

We hoped that the progressive wave in the 2018 local elections (District 6 was not on the ballot that year) would help Jerry embrace his more liberal side. Instead, he has done little to support those working to enact the changes that Athenians have overwhelmingly voted for and at times has chosen to obstruct those changes.

Sometimes Jerry offers numerous amendments that weaken other commissioners’ progressive proposals. Other times, he rejects community members’ legitimate demands for justice, most clearly and recently on the proposed Linnentown resolution that would provide recognition and redress to the victims of the racial terrorism enacted on their neighborhood by UGA and the Athens government in the 1960s. Jerry often pays lip service to progressive goals but rejects the concrete proposals before him. For example, in his answers to our questionnaire he says that he believes in transforming our local EMS and 911 call center to be publicly run, but in his years of service on the EMS oversight committee, he has made no progress on moving us toward that goal without being dragged toward it by citizen activists.

Commissioner NeSmith does deserve credit for being among the most responsive commissioners to individual constituent concerns, which he takes seriously and acts upon with diligence. He’s engaged and takes the business of the commission seriously, but often privileges his own district over the needs of Athens as a whole.

And, of course, we haven’t forgotten his co-hosting a fundraiser for Houston Gaines, then a Republican candidate for State House, in 2017. Gaines went on to win that election and was a crucial vote in passing Georgia’s forced-birth bill. 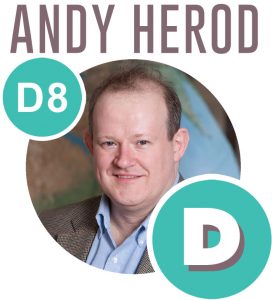 Andy Herod is not running for office again. 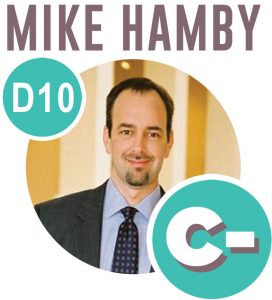 Unlike some long-time commissioners who have opposed the folks elected in 2018, Mike Hamby has improved slightly as a commissioner since then. He was key in crafting the $4 million prosperity package, but the legislation could have been clearer on ways to use those funds, and his votes over the past year give him a C+ objectively. That said, the votes on which he was with us weren’t risky ones and he has yet to take a position on the Linnentown Resolution. In addition, along with Jerry NeSmith and Andy Herod, he co-hosted the fundraiser for now State Representative Houston Gaines in 2017 thrown by then-mayor Nancy Denson. 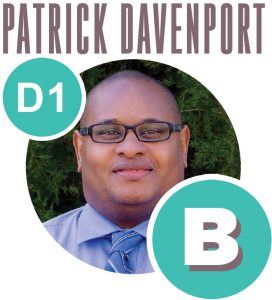 Patrick stepped up to the plate in a huge way when he was called upon by community members to run in 2018. Since his landmark, upset victory, he’s had to adjust to the rigors, conflict and possibility of local governance during a time of transition.

He displayed great courage and conviction in voting against a $250,000 settlement for Officer Taylor Saulters, who allegedly struck Timothy Patmon with his patrol car in 2018, even while most of the commission capitulated to legal threats from Saulters’ lawyers. He’s also been a strong voice for EMS reform and in opposition to the $87 million new judicial center in the absence of more substantive criminal justice reform.

At the same time, Patrick’s lack of patience with frustrating and complicated processes has led him into disengagement with some critical policy areas: the $4 million prosperity package to fight poverty and the Resolution for Recognition and Redress for Linnentown. We hope he reconsiders and lends his evident moral conviction to these critical justice areas.

Overall, Patrick entered the commission with the least political experience, and we look forward to seeing him continuing to grow into the role as he becomes increasingly effective in his long-term fight for living wages, community involvement and a more just Athens. 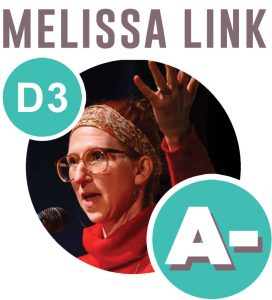 Melissa is the strongest commissioner by far when it comes to combating the power that big developers and landlords have in our town. She speaks out clearly and loudly on those issues, attempting to get the rest of the local government to hold developers like Landmark Properties accountable for the impact that they have on the environment, rents, historic preservation and more. She is often outvoted, but we trust her judgment on this issue and on many others.

We are disappointed in her caving to the demands of Taylor Saulters’ lawyers to pay him $250,000, and we believe she could be more proactive than reactive in her proposed legislation. There is no question, however, that she has been and continues to be a firm voice and solid vote for progressive change in our town (as with her support of the Linnentown Resolution without reservations), as well as someone who is willing to pore over easement agreements to represent her constituents’ interests. 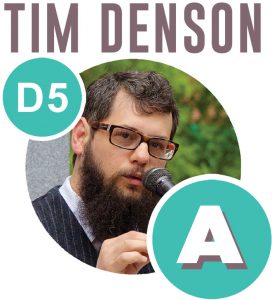 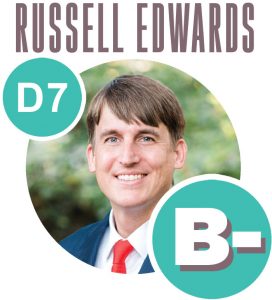 We believe that, for the most part, Russell Edwards has good positions on the issues we care about, but he often prioritizes the ones we feel are less important. There is no question that he is an improvement over his predecessor in this seat, but we would like to see him be bolder on justice issues in particular. He cares deeply about downtown, even though it is not in his district. He has voted relatively consistently with our preferred positions on the issues, with the exception of the Saulters settlement.

Russell has refused to take a concrete position so far on the Linnentown Resolution, which is concerning, but he has been willing to engage in dialogue on the issue, putting himself in situations that are clearly uncomfortable for him. We would like to see him support the resolution as is (as should all commissioners), but at least he is engaged on the topic. 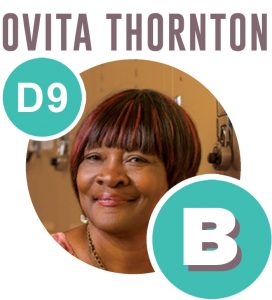 Ovita has been an interesting voice on the commission and one who is unpredictable. She has her own take on what is right, and she follows her conscience. She has been solid on justice issues for the most part, voting against the commission’s designation of the judicial center as part of SPLOST alongside Patrick Davenport. We would like to see her apply the same scrutiny to developers, but she is frequently a voice for listening to constituents and for taking the time to craft people-powered legislation. Her characterizing the $4 million prosperity package as potentially “hand-outs” suggests a need to prioritize wealth redistribution, but her support of the Linnentown Resolution is a plus. 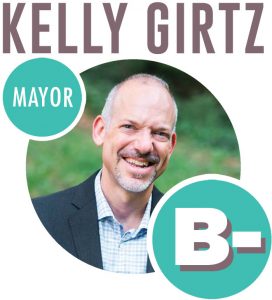 There is no question that Kelly Girtz has been a massive improvement over his predecessor as mayor, but we would like to see him fulfill more of his campaign promises. With Linnentown he has yet to put the resolution on the agenda, but he has met with the organizers and residents to form a committee. This is a first step to meeting the demands but the residents want the resolution passed and a specific committee for Linnentown. Kelly appears to be standing in the way of decriminalizing cannabis at the local level. His leadership on the COVID-19 outbreak was quick and forward thinking, and he has taken some steps toward an equity package and bail reform. That said, those steps do not go far enough, and Girtz remains unwilling to push for people-led legislation.