What is fare-free bus service?

Fare-free means that there are no fees for riders at all; anyone can get on and ride whenever they want. It’s that simple!

Cities that provide fare-free transit include some far-off destinations such as Tallinn, capital of Estonia, and others much closer to home like Clemson, SC, and Chapel Hill, NC. These cities understand that, as a society, we choose to hold some resources in common for all people to share. For example, no one is charged to walk down the sidewalk, no one pays to check out a book from the public library, and our children do not directly pay for their education or to be bused to school; any other way would be unthinkable to us. Likewise, as drivers we are not charged when we drive down a road, even though the tax on gasoline does not come close to covering our road and bridge repair needs.

Public transportation should be no different, especially since a number of social benefits are gained the more people use it instead of driving.

What are the benefits?

UGA Transit has been fare-free for decades and would never go back to charging a fare. There are so many riders on campus that if each student took the time to dig in their pockets for change, they’d all be late to class. It’s much more efficient to open both doors, let everyone on quickly, and pay for the system through student fees.

There are many other benefits to fare-free transit beyond speed and efficiency.

The Right to Mobility

We live in such a car-centric culture 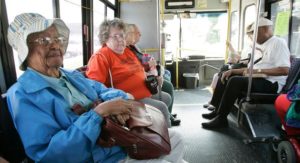 that sometimes we forget the people who either can’t afford a car or who aren’t able to drive. We in A4E believe that all have a right to mobility regardless of documentation status, age, poor eyesight or other disability, or even ability to pay. Fare-free transportation would ease the burden of living in poverty, and in a town with a 38% poverty rate that’s not something we can take lightly.

Focusing on the needs of those on the bottom rungs of our society has another benefit beyond knowing that we’re doing the right thing: economic growth.

Relying on public transportation is much cheaper than taxi service and far cheaper than owning a car, nevertheless those fares add up. Riding twice a day at $1.75 per trip would cost $1,277 yearly. When passes are purchased at the bulk rate, riding twice a day would still cost $1,029. Someone living below the poverty line could easily spend 10% or more of their yearly income on bus passes.

If we instead let bus riders keep this money, they will certainly spend more at local shops which will grow our economy, helping everyone. Not only are we ensuring people get to the grocery store, with fare-free transit we’re also making sure they have a little extra money in their pockets when they arrive. Local and state governments will also benefit because they split our 8% sales tax, each raking in 4% of each new transaction.

One of the most important metrics used by transit systems to judge their own performance is cost per rider. Those who oppose fare-free service are also the first to stress the importance of reducing taxpayer subsidy per rider. These people complain about night and weekend service because ridership is lower at these times, meaning that taxpayers have to pay more for each rider who does end up using the service.

Certainly we agree that, all things being equal, a more efficient transit system is better than a less efficient one. We’ve got good news! Fare-free bus service greatly increases ridership wherever it is tried. The boost varies but is normally between 20% and 80%, according to the National Center for Transit Research.

Ditching the fare-box also gets rid of the expenses needed to collect fares, which are substantial. In Athens, money counting, ticket printing, auditing, fare-box purchase and repair cost at least $150,000 a year: 19.6% of the money collected from fares (Athens Transit Director Butch McDuffie, personal communication).

The graph measuring the cost from the Athens-Clarke County General Fund only is a bit different.

By increasing ridership and decreasing costs associated with collecting fares, going fare-free helps both sides of the cost per rider metric and would reduce taxpayer subsidy per rider. If your main interest is a more efficient system that makes better use of taxpayer dollars, then fare-free is for you.

Increased ridership brings with it several additional benefits, especially if some of these extra riders were people who would have otherwise driven a car. Those benefits include: lower carbon emissions, less need for parking, less traffic and improved public health. You can read more about them here.

It’s important to note that about 60% of Athens Transit riders already ride free because they are associated with UGA. Athens Transit doesn’t keep track of demographic info on riders, but national statistics show that transit users have lower incomes overall and are more likely to be people of color. Why should they be the only people who pay a fare? Why do we accept that our local government is spending our tax dollars to purchase expensive fare-boxes whose function is essentially to extract money from low-income black people? In so doing, our transit system operates less efficiently, economic growth is depressed, pollution and traffic are increased, and our health suffers. All for $615,000 a year. Is it worth it?

Can we afford it?

Yes, we can afford a fare-free transportation system that works for everyone. For the 2018 budget, our local government cut support to Athens Transit by $734,000. Interestingly, the amount cut is nearly the same as it would cost to implement fare-free service. At the same time, total local government revenues increased $16.8 million over the last fiscal year.

Why was Athens Transit’s budget cut in a time of economic growth and increasing budgets? The local government feels that transit should be self-sustaining, and only provides money as a last-resort to keep the system functioning. One of the Transit Department’s objectives is to “develop alternative revenue sources that have the least impact on local community tax payers,” as if once these sources are discovered, the local support would be dropped. Why not expand service or remove fares instead? As the graph below shows, the revenue gained at the fare-box is a small portion of Athens Transit’s total budget, which is itself much smaller than the budget increase in 2018 alone due to an expanding economy (click on the image to see the full graph).

Why haven’t we switched to fare-free already?

Unfortunately, the ACC Mayor and Commission have shown little interest in providing dedicated funding to Athens Transit, meaning in most cases they want to provide as little as they can without cutting service. In 2012, Mayor Denson succeeded in cutting night service back one hour (to 9:45pm), and last year she fought to cut it again to 7:45pm, but she was overruled by the commission.

However, change is on the horizon; due to term limits, Mayor Denson will serve her last year in 2018. There are also progressive candidates who support fare-free bus service running campaigns for commission this year, such as Tim Denson. If we can convince the commission of the merits of removing fares, the only remaining obstacle will be UGA.

The local government fears that if Athens Transit removes fares, UGA will use this as an excuse to stop contributing as well. UGA is currently paying about $600,000 a year to Athens Transit as part of a contract which is re-negotiated every three years. These negotiations are difficult for the local government, with the Athens representatives at times overwhelmed by UGA’s superior leverage (ACC staff and local government officials, personal communication). UGA chooses to press its advantage, even though it is not a for-profit institution. It is a public institution with a social responsibility to the community in which it is based. Perhaps it’s true that UGA would choose to abandon this responsibility for a small monetary gain if Athens went fare-free.

They have not been asked about this, so we should not be casting judgement yet. But if true, this would not be acceptable in our view. If true, UGA should be publicly shamed until they relent and agree to continue paying their current contribution (at least) for the long-term. It’s the right thing to do. We know they can afford it, because we’re only asking for what they are paying now.

Public transportation has enormous benefits to society and should be supported by policy-makers at every opportunity. Many societal resources have long been shared without objection. For example, should those without cars worry that some of their tax dollars fund road repavement? Do those without children have a right to complain that they are helping to fund education? Should those who dislike reading demand that libraries rent their books for a fee? In a society that values transportation, education and reading, it seems clear that the answer is no. It seems equally clear to us that those who complain fare-free service would give unworthy bus riders something for nothing are similarly off-base.

Transportation systems should be judged by their ability to get as many people around as possible, conveniently, in as short a time frame as we can manage. Extra points for doing this in a socially or environmentally-responsible way. As a society, we should fund whatever system does these things the best, and put less money towards any system that does these things inefficiently or with unwanted consequences. What we should not judge a transportation system on is its ability to raise money; that’s how we judge our taxation systems.

Once we ditch the farebox, expand hours and frequency, and restructure the system in other ways, we will have a transit system to rival any in the world. We will become a more just and equal society, we’ll save money, we’ll save lives, we’ll reduce traffic and we’ll spark economic growth.

What are we waiting for?

The Athens VA outpatient clinic sits off of US29 on the northern edge of town, where it offers Mental Health Outpatient care, […]

Athens Transit is asking for input via this short survey as part of the Public Transit Study. PLEASE take just a moment […]