Presumably, every reasonable person knows right from wrong. But what is right and what is wrong?  When debating a subject like a workplace ethical complaint, we often run into statements like the following that stifle any chance of reaching a meaningful understanding:

When it comes to whistleblowing, the accuser often assumes a greater risk due to their lack of power or resources to proceed. The accused still has a lot to lose, but calling out a superior can be daunting. With an employee who raises an ethical complaint against an employer or a coworker, the law is often overshadowed by intuitive responses, factual or not. It doesn’t help that legal reality might not coincide with popular belief. Whistleblowing is a necessary reality for the sake of freedom and justice, and how we address it is a reflection of who we are.

Rights and protections need to be spelled out, and protecting whistleblowers is no exception. The need to protect people acting out of perceived duty to point out questionable practices has existed for a long time. Even as early as 1778, the Continental Congress recognized the need for such safeguarding, based on a case in which four sailors, at the risk of being tried as traitors, called out their commanding officer for abuses.

Over the past few decades, protections for whistleblowers have been signed into law at the federal level. The Civil Service Reform Act of 1978 cited, among other things, improper personnel practices. The Whistleblower Protection Act of 1989 protects federal employees from retaliation for reporting incidents of unethical behavior. Others acts followed: the No Fear Act of 2002 (agency financial responsibility resulting from court cases), the Whistleblower Protection Enhancement Act of 2012 (clarification regarding nondisclosure agreements) and a presidential policy directive (#19, also prohibiting retaliation) signed by President Barack Obama in 2012.

Most recently, the U.S. House of Representatives passed HR 3625, the PCAOB Whistleblower Protection Act of 2019, which is presently with the Committee on Banking, Housing and Urban Affairs. This bill is intended to amend language of the Sarbanes-Oxley Act of 2002, clarifying definitions about the origins of information, money awards, and the term “whistleblower.”

Legal protections may help increase the confidence of someone contemplating filing a claim. Andy Greenberg, in his book “The Machine Kills,” observes that technology is also speeding up the process for whistleblowing. Whereas it took Daniel Ellsberg more than a year to copy thousands of pages by hand one at a time (the Pentagon Papers), it took Chelsea Manning only a couple of months to copy hundreds of thousands of files to share with Wikileaks.

Ellsberg faced up to 115 years in prison, and it was only because of misdeeds by the government that all charges against him were dropped in 1973. President Obama commuted  Manning’s 35-year sentence after she served seven years of it (she continues to serve time for contempt of court for refusing to testify in a case involving Wikileaks). Nonetheless, laws allow whistleblowers an opportunity to access a path freer of retaliation.

People in government are not the only ones protected. Companies in the financial sector must comply with Sarbanes-Oxley, while the 2011 Dodge Frank laws increased the reach of protections beyond a parent company. Food workers are protected under Section 402 of the Food Safety Modernization Act of 2012, and the Occupational Safety and Health Administration, under what’s commonly referred to as OSHA’s 20, works to protect workers in numerous industries who report violations of an environmental nature.

Protections are not only in place at the federal level. In Georgia, public employees are protected from retaliation when reporting ethical abuses due to O.C.G.A. §45-1-4, the Georgia Whistleblower Act of 1993. While these employees may not necessarily fear for their jobs, there are no guarantees that their identity will be protected.

As for non-public employees working in Georgia, protections are not as clearly defined. Employees who work under a contract may have protections spelled out, but those who are not are considered at-will employees, which means that an employer has the right to dismiss a worker for no reason. Providing information against an employer is risky business. A number of law firms promote services to help with this challenge, encouraging people to seek legal advice should they feel compelled to move forward.

This is not to say that there is no hope for non-public workers. Private companies may and do take it upon themselves to protect all workers, both accusers and the accused. Take Pilgrim’s Pride, for example. The hatchery’s Athens location, employing about 1,500 workers, has a protocol to report abuses in place, according to Seandre Lee, the plant’s human relations manager. Employees who witness anything irregular can call the corporate office, and a protective procedure is followed. The strategy is designed with the rights of both the accuser and the accused in mind, including confidentiality. This policy was developed by corporate officials, and, according to Lee, staff members are informed of the process during new-employee orientation (the policy is even available in 20 languages).

Maybe nobody likes a tattletale. But in a civil society, the act of whistleblowing ought to be considered a protected liberty, whether an alleged violation eventually turns out to have merit or not. Any charges must be considered respectfully and thoroughly, as both sides have a serious stake. 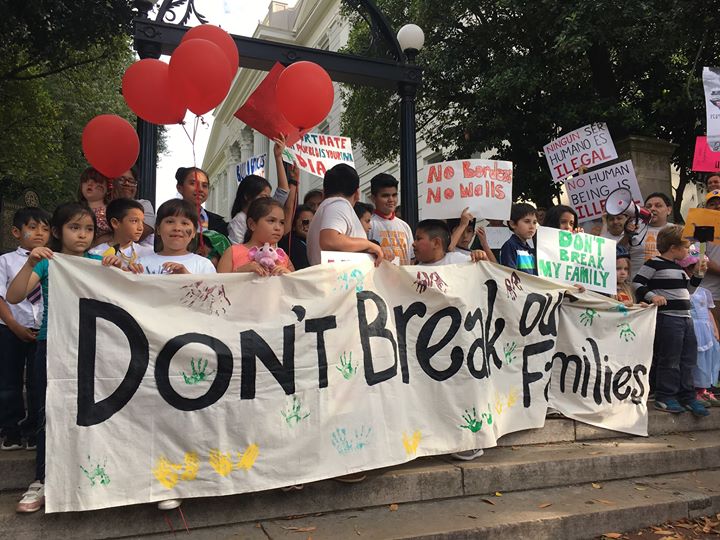 This May Day, Athens for Everyone was proud to stand in solidarity with our undocumented neighbors who are targeted by the detention […]