Hundreds of Athens residents gathered outside city hall on Sunday to pray for Philando Castile, Alton Sterling, other victims of police violence, and the 5 officers killed in Dallas. This peaceful protest against the killing of black men and women was called by the Athens Anti-Discrimination Movement and Athens for Everyone. 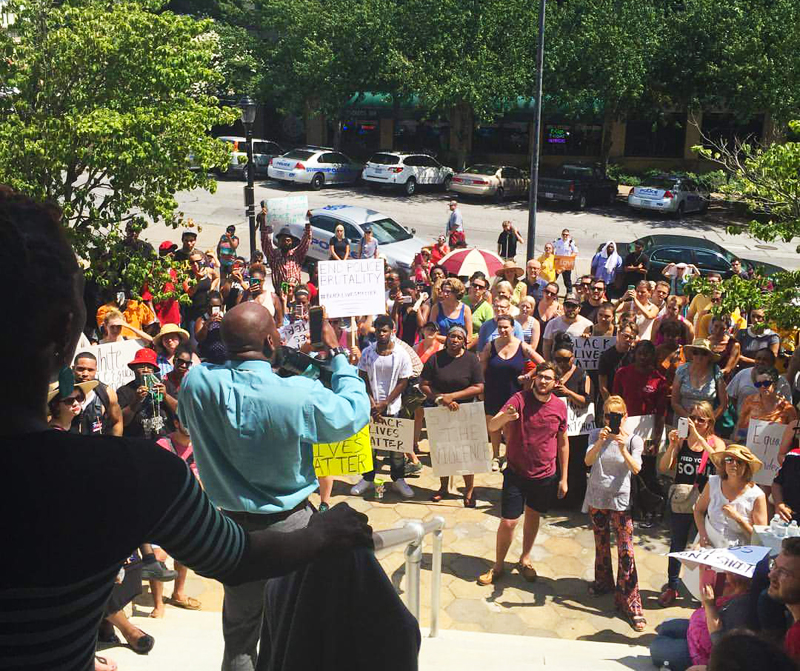 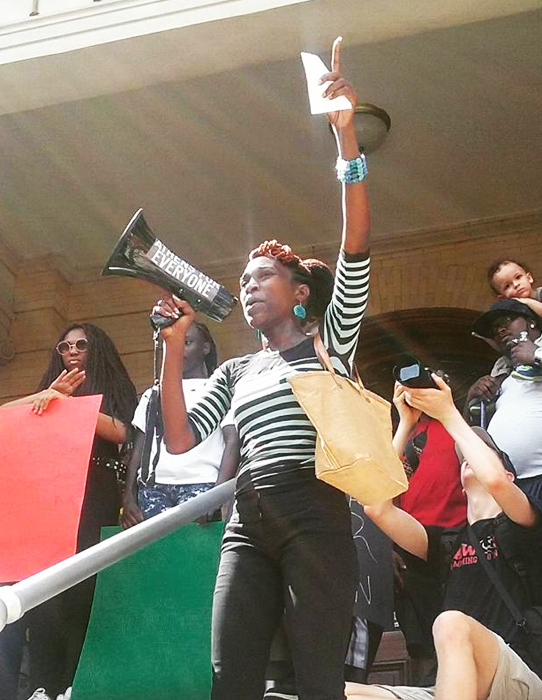 “All the people who want the violence and killing to stop, we need to come together, because we don’t want this to happen in our community. We don’t want police officers killed out of vengeance, we don’t want young black men shot down.”

Mokah, as quoted by Flagpole

When Ishues, a local rapper, took the megaphone, he told a story that many long-time residents of Athens will remember.  As reported in the Flagpole article:

Ishues recounted the story of Edward Wright, a 20-year-old who was shot and killed by police in the Nellie B neighborhood in 1995.

“Me and my friends organized a rally,” Ishues said. “Twenty years later, we’re marching about the same thing.”

As the protest was winding down, a memorial for the victims of police violence was constructed under the Spirit of Athens statue, and a moment of silence for the five officers who lost their lives in this chain of events was also observed. It is our hope that we will continue to live in peace and spread love to all in our community and beyond.

A few days after Sunday’s protest, a meeting at the library was held to discuss the situation as a community.  It was standing room only. Problems and possible steps towards solving those problems were discussed by attendees and a panel of Mokah Johnson, Economic Justice Coalition’s Linda Lloyd, A4E President Tim Denson, and Athens Police Chief Scott Freeman (some of the positive steps discussed can be found below). Chief Freeman answered questions from the public and discussed some of the ways he is hoping to improve policing in Athens-Clarke County.  At the same time, an anti-discrimination ordinance is being discussed by the Mayor and Commission in response to the previous protest organized by the Anti-Discrimination Movement. 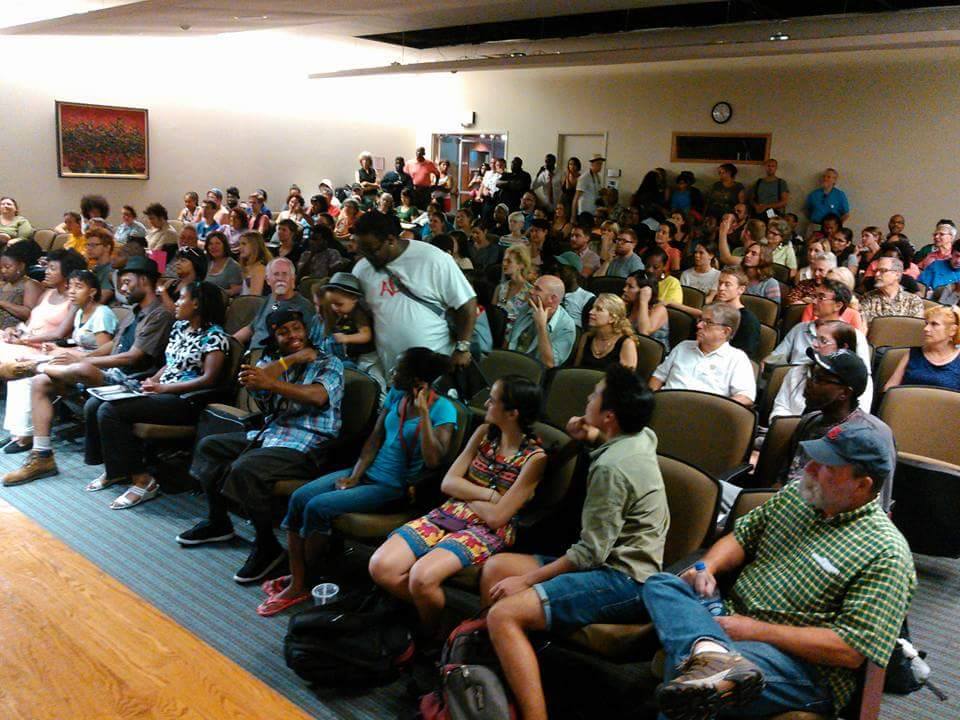 Stop the Killing follow-up meeting at the ACC library

What’s next: The Government Operations Committee of the Athens-Clarke County Commission will be meeting and discussing what the ordinance should consist of. Please attend the discussion on the anti-discrimination ordinance at City Hall on July 21st at 5:30pm. If you cannot attend, please contact your Commissioner (click here to find them) and let them know that we need a strong, enforceable ordinance.

Linda Lloyd of the Economic Justice Coalition urged attendees to register to vote and turn out at elections. You can register (and also make sure your registration is still in good standing) here: registertovote.sos.ga.gov

Mokah invited residents to sign up to attend an upcoming officer training or the Citizen Police Academy.

This is an amazing moment – we have a chance to bring real change to our community and to make Athens a positive example. 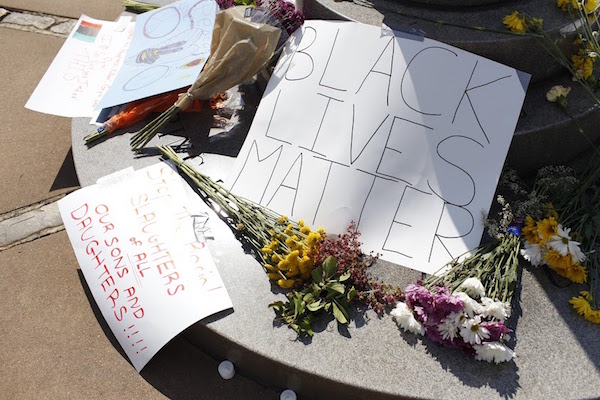 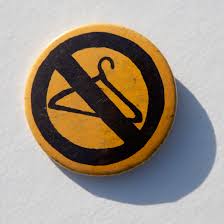 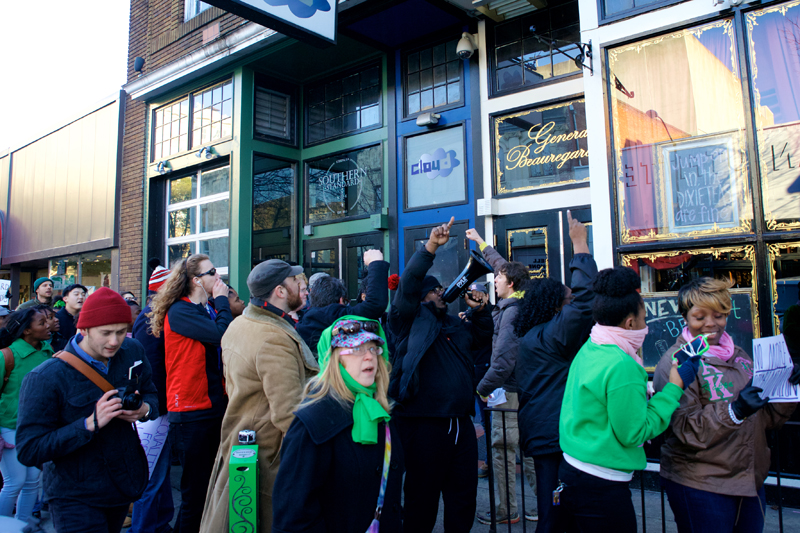 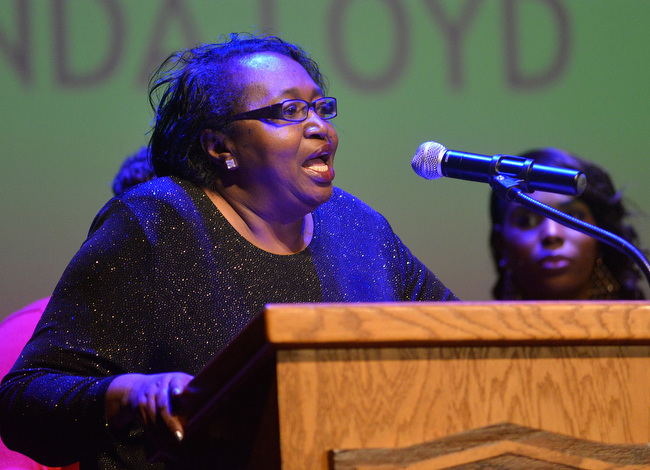