A candidate forum for the special election taking place on November 7 was held on Monday, October 9 at Oconee Veterans Park. In this article, we will focus on remarks made by the candidates running for district 117, Houston Gaines (R) and Deborah Gonzalez (D).

Question: What do you think about charter schools?

It’s important to remember that charter schools are often run by private companies and are unaccountable to the public. At times, they tend to bring in less experienced teachers trained through programs like Teach for America who stay in the school for 2-3 years and then leave. They also tend to skimp on some services, as Deborah mentioned. Some are notorious for essentially screening out students with disabilities so they don’t have to provide special education services.
Charter schools at times can also advance racial and ethnic isolation. Segregation is twice as high in charters than in traditional public schools.

Question: If the Presidential election were held tomorrow, would you vote to re-elect Donald Trump?

We can only wonder how much of Trump’s agenda Houston Gaines is supporting here. The Muslim ban? Ending DACA? Denying people health care? Lowering taxes on the rich? Threatening to use nuclear weapons? Ending the Clean Power plan? Backing out of the Paris Accord? Supporting any of these things is shameful.

The fact is that the US already spends more per capita on healthcare as a percentage of GDP than any developed country in the world and it is the only one not to have some form of universal health care access. Switching away from private insurance would save hundreds of billions of dollars per year in administrative costs, allowing all Americans to have healthcare access at a lower total cost than we are currently paying.

Deborah is certainly correct that the first order of business in Georgia must be Medicaid expansion. The Republican majority’s refusal to accept the federal money to expand Medicaid has led to thousands of Georgians dying and many more suffering from preventable or treatable illnesses and enormous medical bills. Moreover, with our rural hospitals being starved out of business by the refusal of this money, it is well past time to expand access and finally accept the federal money.

Question: Why do only a few have access to good healthcare?

Houston claims that expanding Medicaid in Georgia would be “fiscally irresponsible” and would “bankrupt our state.”

The opposite is actually closer to the truth. 90% of the cost of expanding Medicaid will be paid for by the federal government, which is already being taken out of our taxes. Accepting that money back will cost Georgia’s budget a small amount, true, but it will more than be made up for in economic returns. As this graphic shows, Georgia’s economy will gain $24.42 for every $1 invested.

Accepting Medicaid expansion will create thousands of jobs, boost our economy, stabilize our rural hospitals, and ensure our residents have access to the healthcare they need to live productive and happy lives. It is well worth the investment.

For further reading, check out this report from the Urban Institute: What is the Result of States Not Expanding Medicaid?

Houston’s “alternative fact” that raising the minimum wage would put hundreds of thousands of Georgians out of work seems to come from the right-wing Heritage Foundation, although he did not provide a source. The number was calculated by “multiplying the average wage increase among affected workers by the estimated long-run elasticity of labor demand” and has nothing to do with actual workers in a real economy. Houston parroting this number as a fact without any real evidence and without a source is telling about his (lack of) intellectual curiosity.

The employment effect of the minimum wage has been a hotly debated topic and intensely studied by economists. Some studies show that it causes job loss, others show that it causes net job gains, but one thing that is consistent is the magnitude of the effect — it’s small. These are studies that actually look at employment in the real world when the minimum wage is increased, unlike in the Heritage Foundation’s report.

We invite you to do your own research on this topic, and we invite Houston Gaines to do some research as well. What he learns might surprise him. Here are some resources to get started:

Question: How do you evaluate the current state of gerrymandering in Georgia?

Deborah comes out in support of an independent redistricting commission here, something Houston has yet to do. At least he admits that this district is gerrymandered, that’s a start, but he is not promising to end these unfair and discriminatory practices.

Question: What is your take on Campus Carry?

Deborah outlines the problems with this legislation very well while Houston gives an unacceptable non-answer. With so many people in the district opposing guns on campus (including many UGA professors, staff, students and administrators), it seems hard to believe that he has no position on it.

Question: Do you support Confederate monuments?

Houston shows clear support for memorializing the Confederacy. He denies local governments the right to move Confederate monuments because they no longer represent the values of their community. Deborah is right that many of these monuments were actually constructed during the Civil Rights era and have more to do with white supremacy than anyone’s heritage. 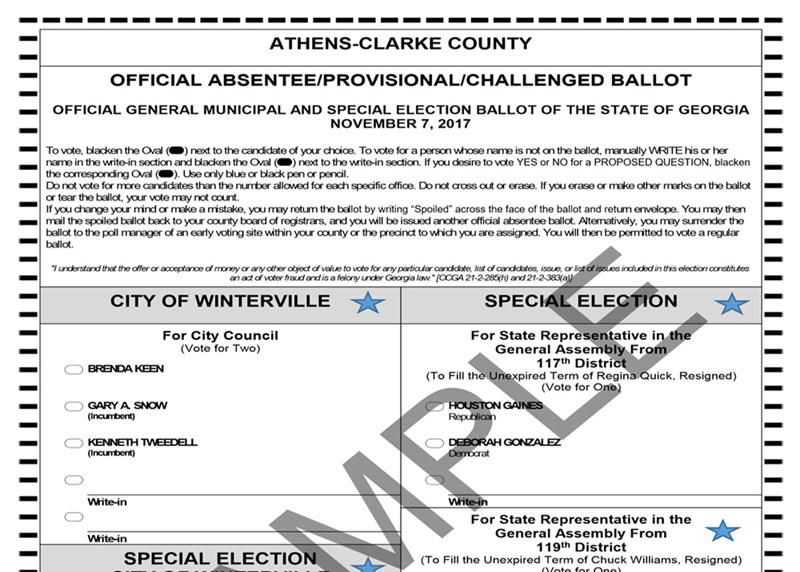 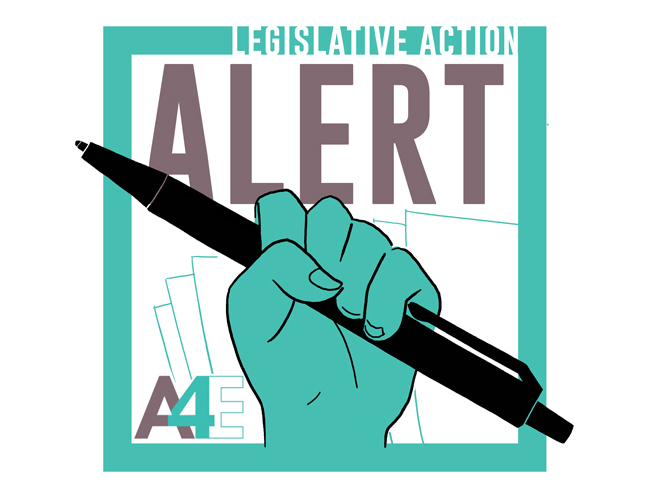 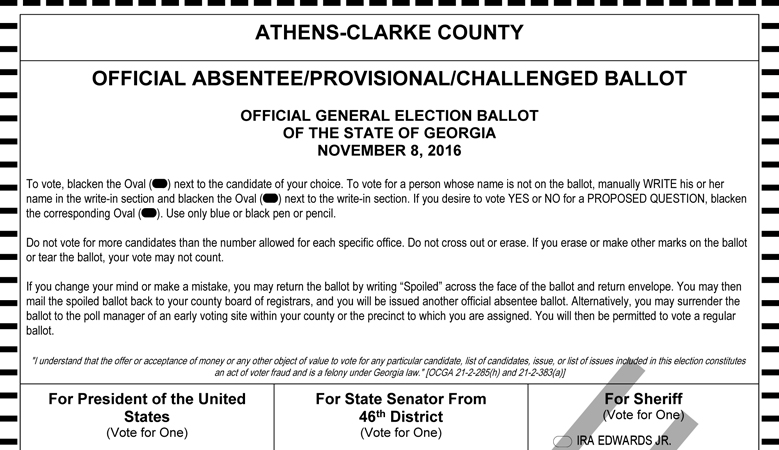 November 8th is election day for Federal and State offices. Take a moment to familiarize yourself with the sample ballot before you […] 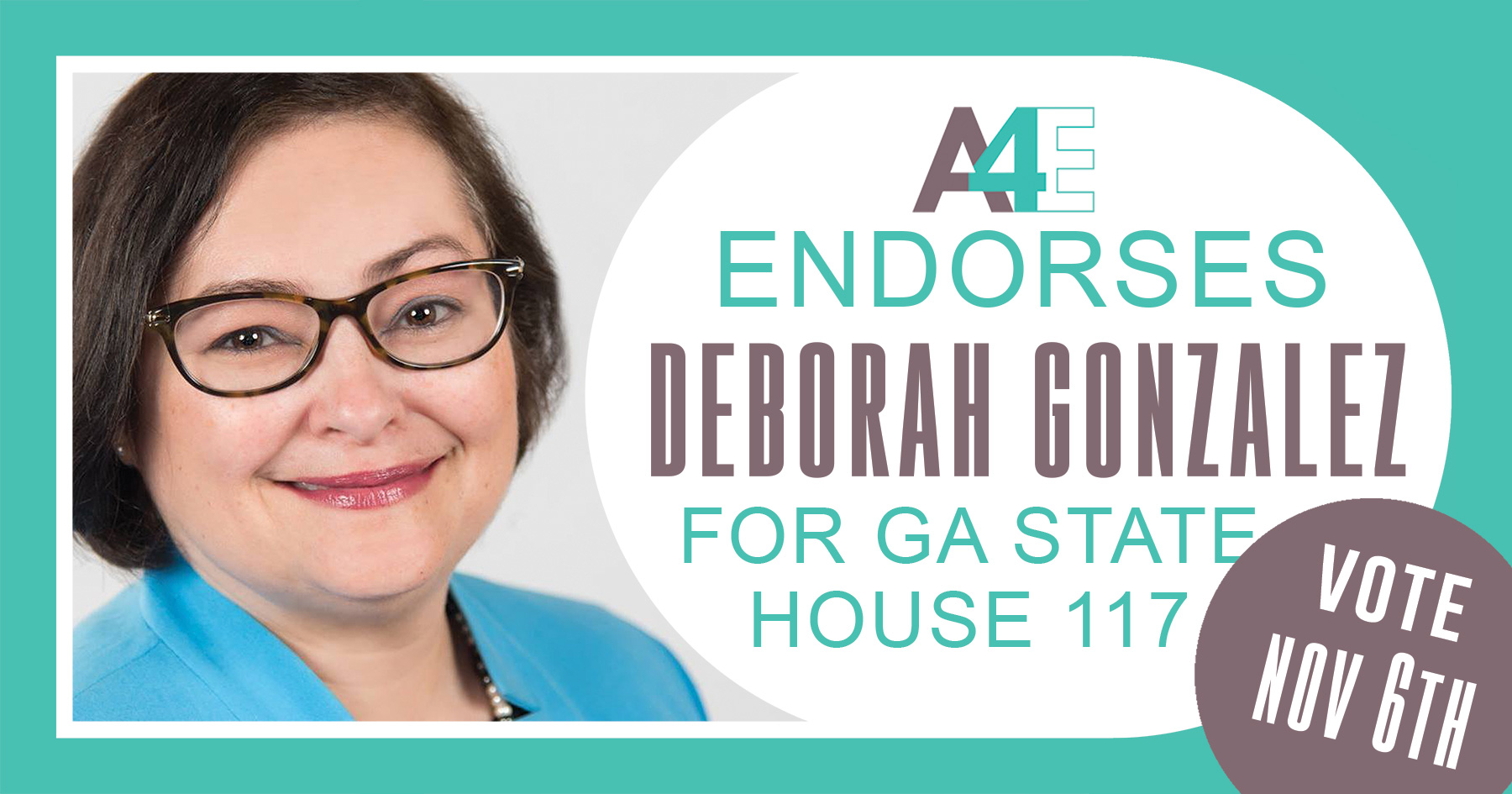 We couldn’t be more excited to endorse Deborah Gonzalez for State House District 117. Gonzalez stands to be re-elected on November 6, […]