Athens for Everyone interviewed 343 people from 10/2014 to 5/2015 about their transit habits and opinions.  You can see a copy of the survey form here.  All interviews were performed in-person.

We wanted to hear from everyone, so went all over town from the East side to the West side.  We went to public housing areas such as Rocksprings as well as upper-middle class neighborhoods like Milledge Circle and subdivisions off Timothy Road. 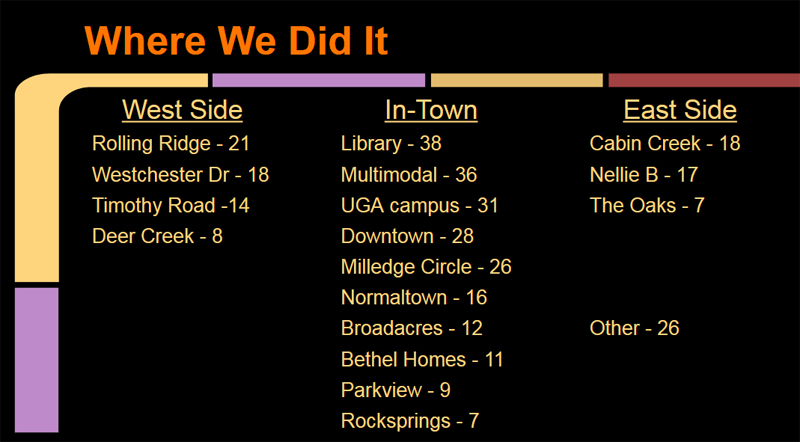 Before we get to our results, it’s important to go over some of the limitations of this study.  This was a sample of convenience, first of all, and no statistical analysis was performed.  Also, all interviews took place along or near an existing bus line, so the opinions of those not currently served by Athens Transit are under-represented.

The first finding of our study was that funding for public transportation is strongly supported by the Athens community as a whole.  Only 6.4% of those surveyed want to cut service to “save money for taxpayers,” meaning that service cuts in recent years probably have not been supported by a majority of Athenians.  95.6% say they are “glad we have a bus,” compared to 92.3% for non-riders.  55.1% of those surveyed would support fare-free buses, even if taxes had to be raised to pay for it (84% support fare-free if taxes did not need to be raised).  The numbers are again very similar for non-riders (50.8% and 82.3%, respectively), showing that almost everyone supports public transportation, whether they ride or not.

What transit improvements are most wanted?

We let respondents pick the top two transit improvements they felt were most important, and the #1 improvement chosen was Sunday bus service (implemented by Athens Transit on 8/16/2015), with 33.5% picking it as their first or second choice.  However, it varied greatly in popularity, depending on how often respondents ride the bus: 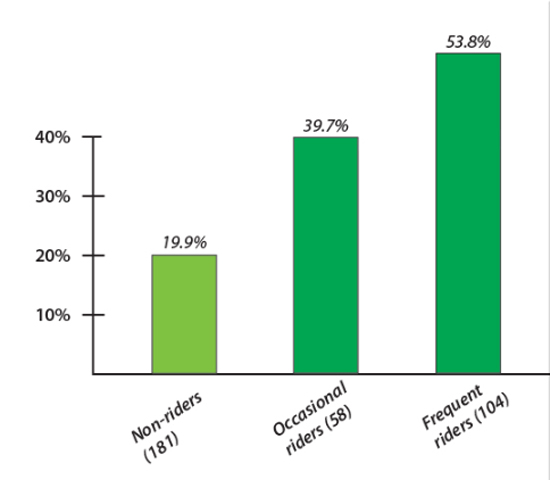 Among those riding “a few” or “many times a week,” Sunday service was extremely popular, but less so the less often people rode.  Additionally, there seemed to be an income factor at play — Sunday service was very popular in low-income areas, whether or not the participants rode the bus at all.  In certain low-income areas such as Nellie B, almost every single respondent mentioned Sunday bus service!  By contrast, only one person in areas considered to be “middle-class” mentioned Sunday. 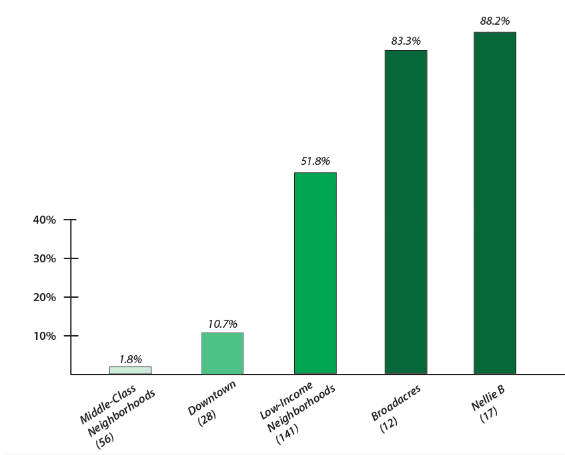 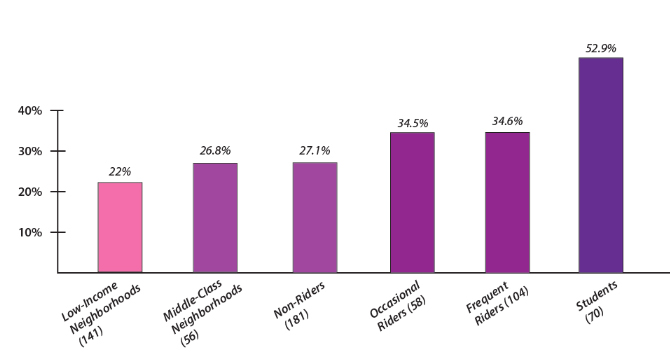 In fact, 60.3% of those in low-income areas believe the bus already comes often enough.  53.8% of frequent bus riders agree. 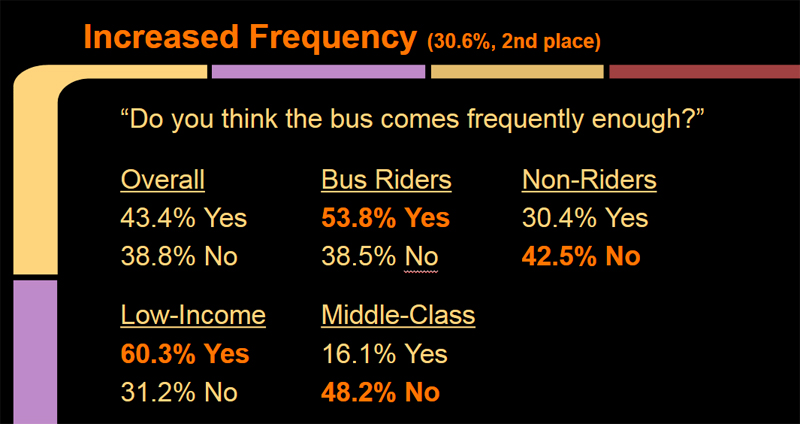 Late night buses (“to 3 AM”) was the third most popular transit improvement requested by survey participants.  It was popular especially with students and frequent riders. 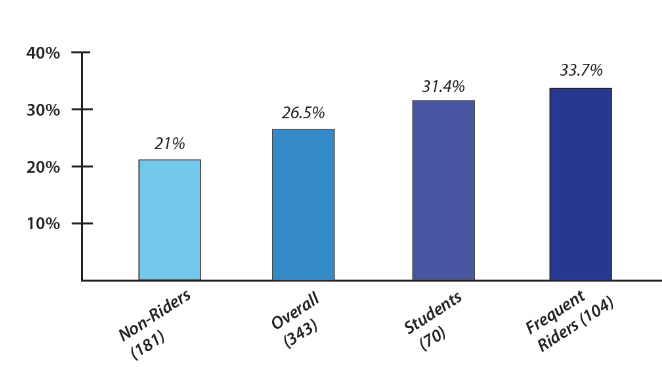 There was broad agreement that the bus does not run late enough (currently, all routes stop by 10 PM).  Only middle-class participants (who probably skewed older on average) thought it runs late enough now. 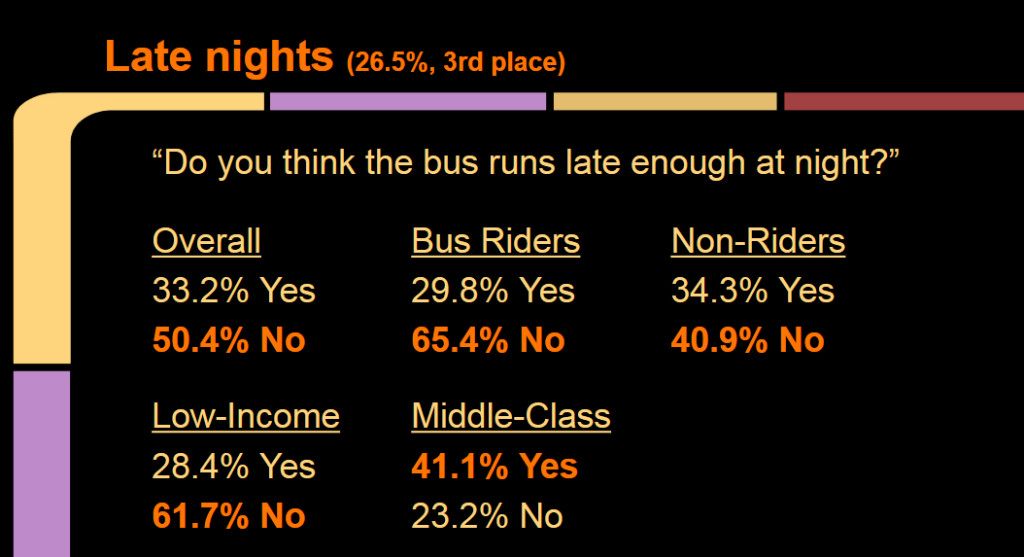 In fourth place, respondents indicated that they wanted the bus going to more places around town.  Two places in particular stood out above the rest: Epps Bridge Road and past the Georgia Square Mall (perhaps all the way to the Caterpillar plant).  The problem with going to the Epps Bridge Road shopping center is that the area is in another county, and would require negotiations with that county.

Areas survey respondents wanted the bus to go (in order of popularity):

Lowering fares was popular with low-income residents, and stands at 5th place in this poll.  It was not a popular response at all with students, who already ride for free.

When directly asked, most of our survey respondents thought the bus fares were reasonable or had no opinion.  Only 30.6% of respondents thought the fares are too high, which is somewhat surprising given that fares have been raised twice in the past 5 years.  Students skew the sample somewhat, but even among non-students, 50.6% thought that fares were reasonable.  Middle-class survey takers by and large had no idea what the fares currently were, and as such had no opinion on this question.

Overall, riders of Athens Transit were pleased with the system, while non-riders thought the bus “needs work.”

You can download the full data from this survey here.  We have the data split into neighborhoods here.

Athens for Everyone would like to thank all survey participants and everyone who helped collect data:

Also, much thanks to Athens Transit and everyone who works there!