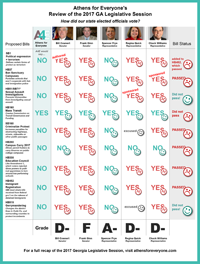 How did my representatives vote?

Made it to the Governor’s Desk

SB 1, Equate Political Expression with Terrorism: A bill that would expand the government’s surveillance and security apparatus, and includes an attempt to target political expression, which is protected by the First Amendment.

A4E OPPOSES this bill because we believe in the First Amendment and that protestors are not terrorists.

SB 1 status: The language of SB 1 was inserted into HB 452 (see below) which passed both chambers and was signed into law.

HB 37, Banning Sanctuary Campuses: A bill that would punish schools in Georgia that refuse to cooperate with federal immigration police.

A4E OPPOSES this bill because we believe all students have a right to attend the university of their choice without fear of deportation.

SB 85, Beer Sales at Breweries: This bill would allow breweries to sell up to 3,000 barrels of malt beverages per year direct to the consumer.

A4E SUPPORTS this bill because we feel the laws surrounding alcohol sales are too complex and burdensome due to the lingering history of prohibition and should be greatly simplified. Also, this bill would support our local breweries in Athens.

SB 160, Criminalizing Protest: This bill would impose mandatory minimum prison sentences for those convicted of aggravated assault against a police officer and increases the penalty for obstructing highways, streets, sidewalks or other public passages to a ‘misdemeanor of a high and aggravated nature.’

A4E OPPOSES this bill because we believe that the 1st Amendment protects the right to gather and protest in public spaces. Furthermore, we believe that such protest is at times necessary for our democracy.

HB 280, Campus Carry: A bill that allows concealed carry permit holders to carry firearms on the campus of any public university in the state of Georgia.

A4E OPPOSES this bill because we believe it would erode academic freedom and lead to a more dangerous environment on college campuses.

HB 338, Education Turnaround Advisory Council: This bill seeks to turn around low-performing schools and has been called “plan B” to the Amendment 1 referendum in 2016.

A4E OPPOSES this bill because–like Amendment 1, which voters handily rejected in November– it gives immense power to a political appointee, has no dedicated funding stream, and is overall punitive in its approach to school improvement.

HB 452, Immigrant Registration: This bill requires the Georgia Bureau of Investigation (GBI) to share information it receives from the federal government on the release from federal custody of immigrants with Georgia sheriffs and to post it online.

A4E OPPOSES this bill because we oppose all discrimination against people based on their country of origin. If the release of an immigrant from custody requires an online notification, so should the release of American citizens. Of course, neither are necessary to ensure the safety of our communities.

HR 3 / SR 6 and 7, Independent Redistricting Commission: A bill the would establish an independent body to oversee reapportioning of legislative districts in Georgia. You can read more about Gerrymandering and about independent redistricting commissions here.

A4E SUPPORTS this bill because we believe in the “one-person-one-vote” standard and that partisan politics has no business deciding the power of our votes.

HB 22, Vote in Any Precinct: This bill would allow county election superintendents to permit voters to vote in any precinct in the county, not just where they are registered.

A4E SUPPORTS this bill because we believe it would make it easier for voters and increase election turnout.

HB 51, Preventing Universities from Investigating Sexual Assault: A bill the would require any felony investigations involving students at Georgia colleges and universities to wait for a police investigation to conclude prior to any university actions being taken. You can read more about this bill here.

A4E OPPOSES this bill because we believe it would curtail the rights and safety of sexual assault survivors.

HB 51 status: Passed the House, stopped in the Senate!

SB 119, Civil Rights for All: This bill would prohibit discrimination based on sexual orientation or gender identity in regard to public services, accommodations, employment, and housing.

A4E SUPPORTS this bill because Georgia has never had adequate protections against discrimination and we believe that human rights are held by all people.

A4E SUPPORTS this bill because it might pave the way for regular funding of mass transit in Georgia, something which is sorely lacking. Georgia is one of only a few states that does not provide operations funding for transit.

HB 160 status: Passed the House, tabled in the Senate.

SB 233, Religious Freedom: A bill to apply the Religious Freedom Restoration Act (RFRA) of 1993 to the state of Georgia. This law prohibits the government from interfering with a person’s exercise of religion even if the interference would apply equally to all citizens. You can read more about this bill here.

A4E OPPOSES this bill because we believe it is a license to discriminate, particularly against the LGBT community.

HB 515, Gerrymandering and Voter Suppression: This bill changes the district lines in Cobb County and surrounding counties to protect incumbents.

A4E OPPOSES this bill because we believe it is an anti-democratic measure to take power away from voters.

HB 515 status: Passed the House, stopped in the Senate! 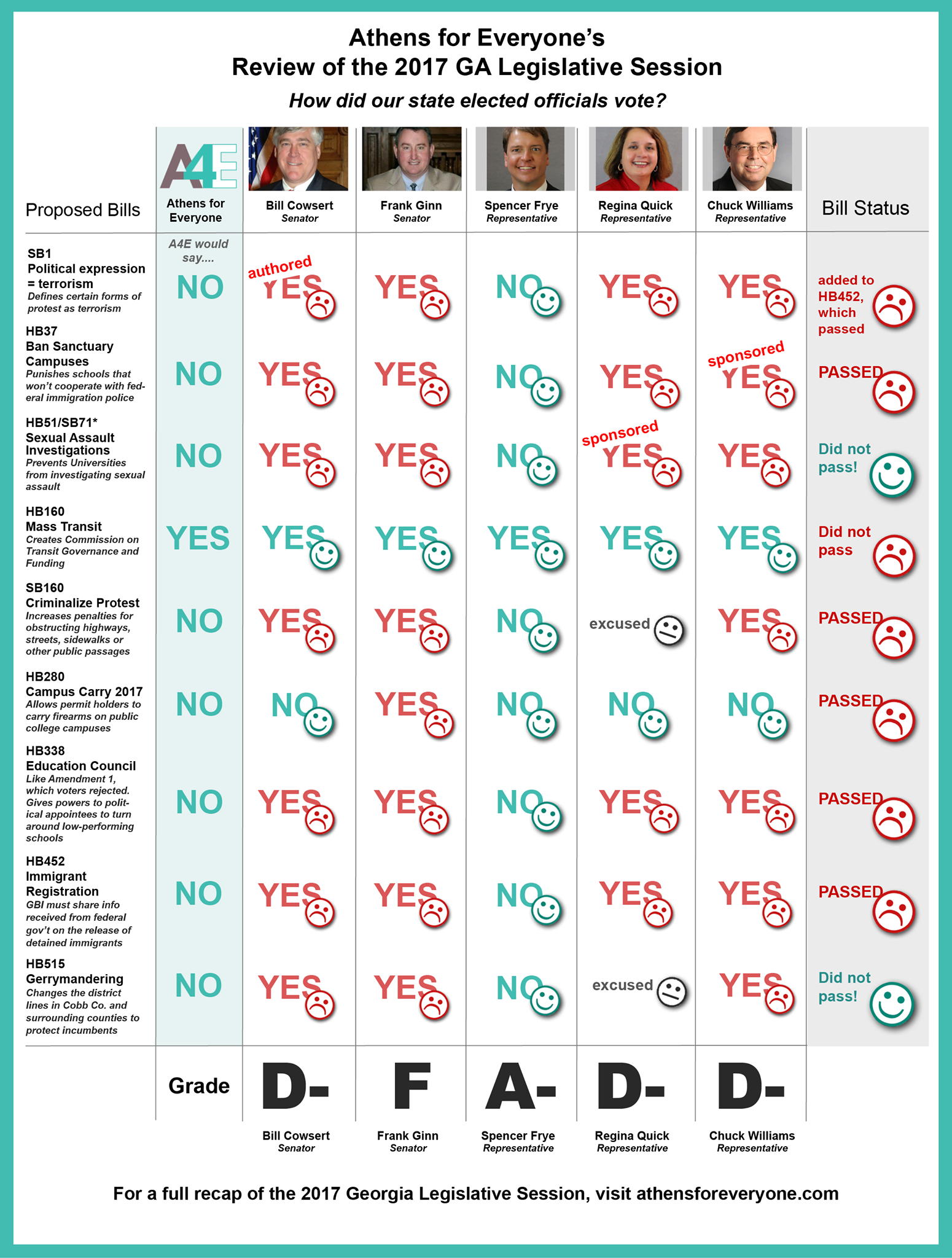 We’ll meet at our office in the Tracy Street Warehouses, Unit 4, Suite 10. Our Board meetings are open to the public. You can see our rolling BoD agenda here. Our office can be somewhat[...]
View Calendar
Add