Around the kitchen table in the U.S, many of us partake of food three times a day – lucky us! But nothing is so personal or has such an impact as eating three meals a day – an impact felt on the environment, our health, on the soil, the plants and animals, agricultural and food service workers. The beauty of kitchen table justice is that change can be achieved overnight – no governmental regulations need to be implemented, no money needs to raised, no petitions signed, no one changed but one – us.

First we need to understand that our diets are culturally based, what we have been taught as children at our parent’s knee. We eat what we have grown up with and it becomes a memory and a bonding experience for holidays. However, some of us eat almost nothing we grew up eating. It takes an amazing short time for some things to change – both good and bad. 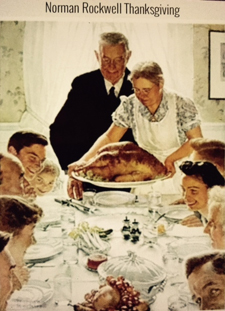 This is our Thanksgiving now. All the same – friends, family, food, laughter, camaraderie. We’ve just replaced the turkey for a tofu loaf. Do we really need a particular food (or dead animal) on the table to celebrate? Do we really need pesticide laden vegetables? Do we really need to exploit and abuse food workers to have a family celebration?

The Food Culture has Changed

The 50’s were advertised as a time of liberation for the American housewife as shown in these ads. But this was also the time when the American diet began to radically change with the rise of processed convenience foods such as T.V. dinners, fish sticks, Betty Crocker cake mixes.

More women work outside the home, we are more urban, have more single households, more processed foods, more fast food, and more information. But we have less time to think about what we eat, and less time to prepare a meal with friends.

The Past Lives On in Our Imagination…

Many people, especially those of us who are over 50 years old, remember grandparents who were farmers and lived lives much like the above pictures depict. My grandparents made their living as small farmers,maybe not so grim as the picture, and on farms, maybe not as picturesque as the picture. However, we like to imagine that the farms that grow our food today are like this but they are not. This ideal farm picture has been aided by advertising and storybooks.

Chickens Then and Now

I remember chickens as the ones on the left, in the sunshine, able to stretch and peck. The reality today is the one on the right; chickens crowded into cages inside suffocating buildings with no light.

Cows Then and Now

I remember cows in the pasture as the ones on the left. And our advertising paints a picture of happy contented cows that still live this way. But the reality is that today’s milk production is an industrial process. Cows are treated as units of production not as sentient living beings with a life of their own and who feel pain and suffering.

Pigs Then and Now

Today’s reality are hog farms completely indoors with crates, especially gestation crates, too small for the pig even to turn around. The ammonia smell can be choking. Hogs may not be cuddly looking but they are smart and sensitive creatures.

Industrialization has happened here too. Gone are the pastures, orchards, weedy fencerows for wildlife of my childhood in Illinois. Go to Illinois now and you will see corn and soybeans from horizon to horizon.

Corn: Inedible from the Field

The irony of this is that on our most productive farmland is growing a product that is NOT even edible from the field by humans. It needs to be processed. 50% is fed to animals and the rest is chemically processed to make HFCS (High Fructose Corn Syrup) and ethanol.

Although Mexicans call themselves “the people of the corn,” DNA tests show that we Americans have more corn protein in our bodies than anyone. Americans have been called “corn chips on legs.”

We have the modern day phenomenon of CAFOs- concentrated animal feed operations, such as the pictures of the chickens and pigs we saw in previously. Because of the terrible crowding and to make the animals grow faster, eighty percent of the nation’s antibiotics, 29 million pounds, are added to livestock food. We have an increasing societal fear and concern about antibiotic resistance. Crops are grown in huge monocultures which makes them vulnerable to disease. The modern cropping systems require enormous quantities of chemical fertilizers, pesticides and herbicides. Crops are now Genetically Modified (GMO) crops, not designed to be more nutritious but to allow them to be drenched with Monsanto’s roundup to keep weeds down. There is increasing concern about this and the IARC (International Agency for Research on Cancer) just announced that Roundup (glyphosate) is a probable human carcinogen. 40% of herbicides sprayed on crops are atrazine and glyphosate. Modern cropping systems need large amounts of undocumented immigrant labor which takes away their access to the justice system. Large areas of traditional American farming communities have been depopulated as family farms have been driven off by large corporations. Finally all this requires an immense amount of water at a time when the world is starting to run short.

Not eating our traditional diets

This radically different food system has created a very different American diet. This is not our traditional diet. What we eat today is not only not what we evolved to eat but it is not even what our grandparents ate.

What exactly is the typical American diet now?

If you are afraid that I am about to ask you to change your diet please be aware that our diet has already been radically changed by the new industrial food system. 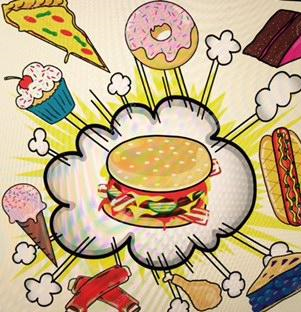 Never in our history have we eaten so much sugar, salt, starch, fat, meat or refined, processed food.

Our Western diet is loaded with calories. We now have the opposite problem than in the past. Most of human history has been the struggle for enough calories and many people in the world today still struggle with that. However, in the affluent Western nations, our problem is the exact opposite – we are struggling to survive with too many calories! 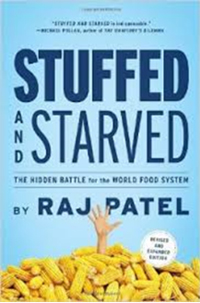 Too Many Calories and Too Little Nutrition

The irony of too many calories has led Raj Patel to write a book called Stuffed and Starved. We have the paradox of people being obese and malnourished at the same time. We are stuffed with food but starved for nutrition. Food deserts, aggressive marketing of junk food, and a general lack of knowledge about nutrition all contribute to this state of affairs.

Is this working for us?

Is this Working for Our Health?
(from the U.S. 2015 Dietary Guidelines Advisory Committee )

1) Roughly half of American adults have one or more chronic diseases related to poor diet and inactivity;
2) Preventable diseases include cardiovascular disease, hypertension, type 2 diabetes, and some cancers;
3) More than two-thirds of American adults are overweight or obese;
4) Nearly one-third of children are overweight or obese;
5) Chronic diseases disproportionately affect low-income communities;
6) Focus on disease treatment rather than prevention increases and strains health care costs and reduces overall health.

We have a health system in crisis. We have huge costs and a system that seems more oriented to fixing us than keeping us healthy. There is mounting evidence that our diet is causing incalculable damage to our health. American children are expected to live shorter lives than their parents largely because a third of them will develop Type 2 diabetes, a preventable disease linked to obesity. We are seeing increases in food allergies, hormonal disruptions and osteoporosis. Unlike the advertisements, we are not protected by drinking milk. The WHO (World Health Organization) states that diet appears to have only a moderate relationship There are whole groups of people who eat no dairy and have no osteoporosis. ALS (affects nerves and cause muscle deterioration leading to paralysis, suffocation and death) is on rise worldwide and thought to be from fish that are accumulating mercury and neurotoxins. Eating at the top of the food chain has consequences in a polluted world. Colon cancer is the #2 killer, lung cancer is #1 – thanks to tobacco. African-Americans have colon cancer at a rate of 50x more than native Africans – the deciding factor points to meat consumption.

Coronary heart disease, cancer and cerebrovascular disease on the rise also from overconsumption of meat products. In October 2015, the International Agency for Research on Cancer (IARC) released a statement declaring that the consumption of processed meats, sandwich meat, bacon is a probably human carcinogen. In 2013 the U.S. ranked dead last among 17 developed nations in overall health outcomes, according to the National Academy of Science.

You may ask where this science is coming from? Unfortunately a lot of what is written about food and nutrition science comes from the food industry system itself. We’ve tried to find unbiased honest brokers of science not beholden to the food industry and have pulled from many different sources. Sources include the U.S Nutritional Guidelines Advisory Committee, the International Agency for Research on Cancer, the World Health Organization and the National Academy of Science. For an individual researcher, Michael Gregor is the kind of synthesizer we are looking for; a medical expert who reads every research paper on nutrition published in English, takes no corporate money and doesn’t make any profit.

How is our industrial food system working for our farm workers, our animals, and our environment? 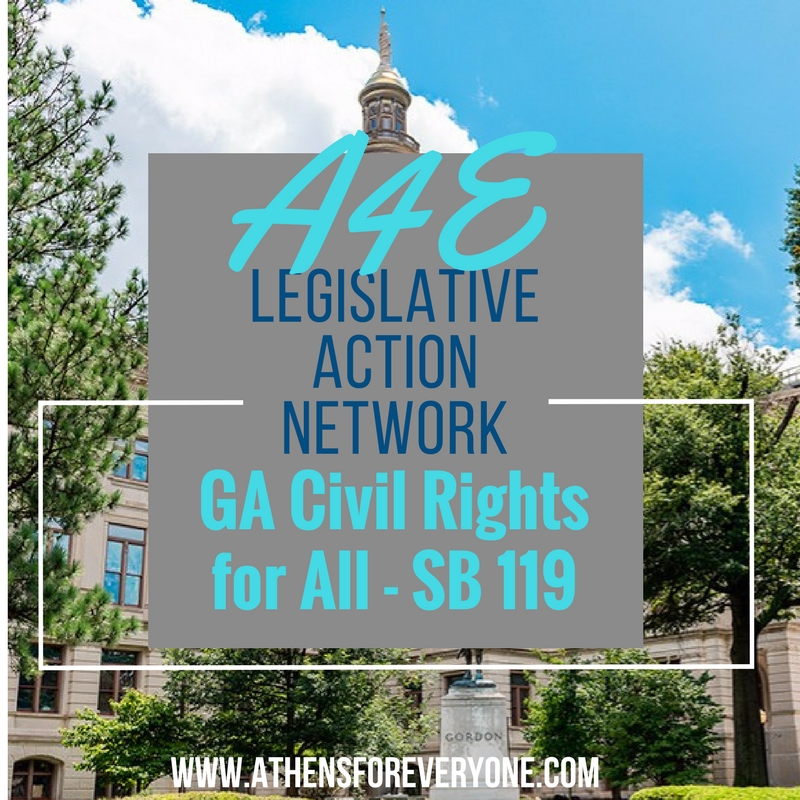 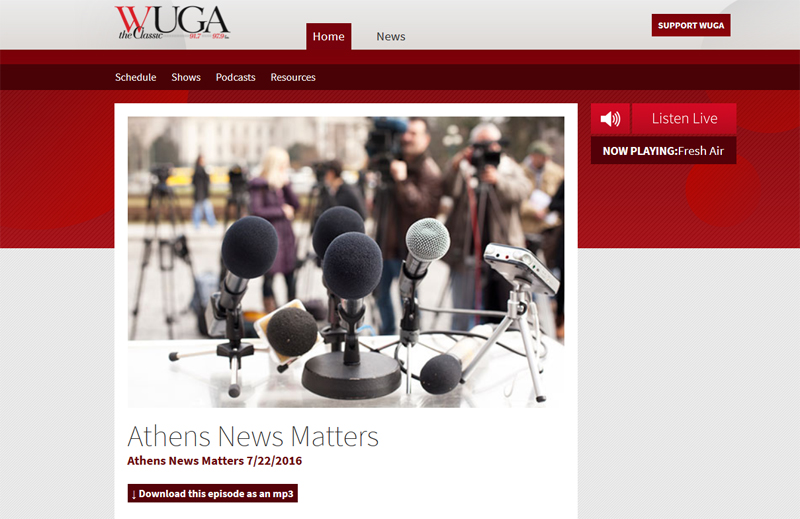 Tim Denson, President of Athens for Everyone; Ashley Mensah, Vice-President; and Jesse Houle, Outreach Coordinator, sat down with Alexia Ridley for the […] 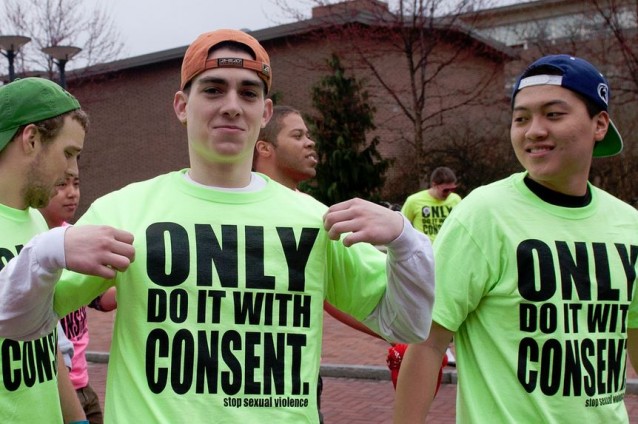 Join us in standing up for a culture of consent! Athens for Everyone is proud to take part in organizing the Consent […]