At times, I’ve been frustrated with our government, but until this year I never wrote letters or called my reps; I never even thought about visiting the Senate.  I know I am not alone.

But in February I helped hand-deliver 707  letters to the Atlanta offices of our US senators, more than 300 of which were written by people here in Athens, many at letter writing parties at the World Famous and Hi-Lo, where bi-weekly writing parties are on-going.

A group of Georgia writers, including myself, all members of the organization Writers Resist, met with representatives from the offices of Senators Johnny Isakson and David Perdue. Our organizer, Anjali Enjeti, began the meeting by explaining to the staffers a major frustration, our inability to communicate with this administration. Isakson staffer Mary Catherine Cromley admitted that the four staffers in the front office “have not put down the phones in the last month.”

I spoke of my fear of a “religious freedom” act, that any such act would lead to state-sanctioned religious bigotry. I explained that I grew up fundamentalist Christian and was abused in the name of religion.

Enjeti asked what the senators’ positions were on a proposed rollback of LGBTQ rights allowing businesses to discriminate against the LGBTQ community. She also asked how our senators feel about the executive order known as the Muslim Ban, which was temporarily suspended by the Ninth Circuit Court. In her neighborhood, John’s creek, 30 percent of the residents are foreign born; many are U.S. residents with green cards or legal visas; many are from seven countries part of the Muslim ban.

Isakson’s staffer, Mary Catherine Cromley, said, “We are letting this sift through the courts, because ultimately they have the final say,” admitting the senators were concerned about the ban’s rollout.

Enjeti then asked about Perdue’s recent bill to limit immigration. My-Ngoc To, whose family immigrated from Vietnam which enabled her to pursue an Ivy League education, explained how this legislation would impact her family, as well as the multi-ethnic population of our state.

In response, Robinson claimed the new bill focuses on prioritizing skilled immigrants, which is beneficial to corporations, which To contested. Laurel Snyder reminded Robinson that such an immigration bill is discriminatory to existing citizens who have family members, that it values the needs of corporations over people. She went on to remind Robinson and Cromley that President Trump was elected on the premise of bringing back jobs for the blue collar worker.

“It’s become clear that Trump is not supporting the worker but corporate America. Will the Senators push back?”

Enjeti reminded them that the current administration has plans to take away health care and build a wall with taxpayer money. When there was hedging, Steve McCondichie asked, “Are the senators for Republicans or for America? Are they going to do what the Republican party says, or stand up for America when Trump comes up with policies that are Anti-American?

When Cromley and Robinson claimed our representatives have been pushing back, I reminded them that there had been, a huge outcry against the nominations of Devos and Sessions, yet they voted the party line.

We had limited time to communicate, our hour long meeting was suddenly shortened to a half hour, but before we left one of us told a heartbreaking story of how her son, who battled cystic fibrosis before the Affordable Care Act, died.

“How many more of our children are going to die?”

Mary Catherine Cromley said, “We do not believe ACA will be repealed without a replacement. ” When pressed she said, “Any replacement plan that anybody would come up with would keep essential parts for preexisting conditions.”

We were being pushed out the door, but before leaving we brought up our objection to Steve Bannon, who is anti-Semitic, homophobic, and a neo-Nazi white supremacist, having a seat at the National Security Council. 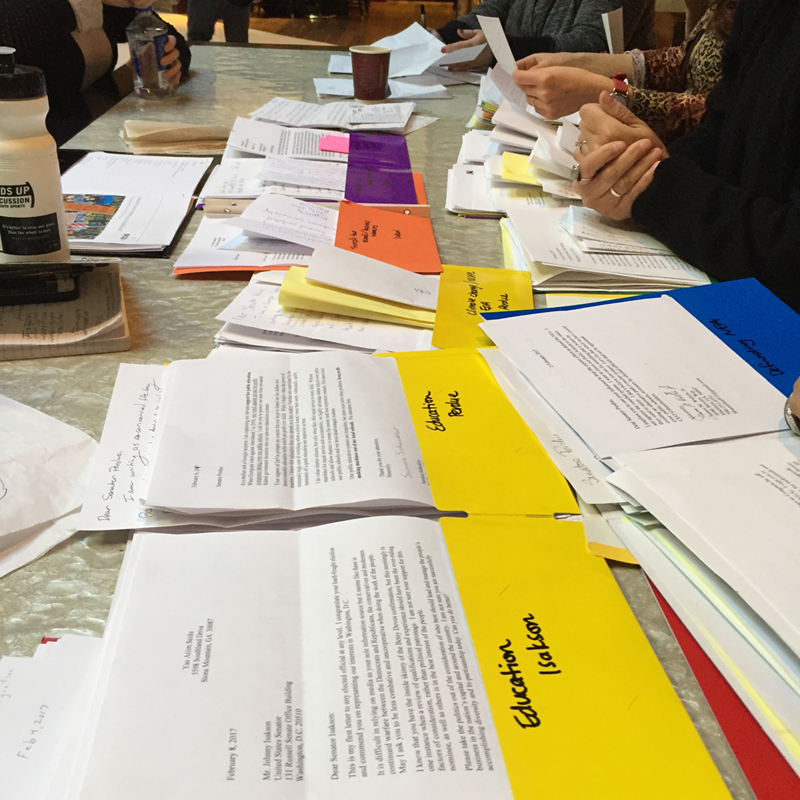 With tears in her eyes, Soniah Kamal told how as an immigrant she and her family came to America and Georgia because she chose to live here. “I want it to be the country I know, which is fair to all Americans no matter where they come from or what religion they are or they don’t have any religion. Separation of church and state is one of the best things about this country– please keep that in mind.”

Even though many of our questions were not answered, as a whole the experience was empowering.

We brought letters representing the concerns of our neighborhoods, and we spoke up for our vision of Georgia as a place where diversity and inclusiveness are celebrated, where our people and our land are valued over corporate interests. Such direct action helps our representatives more accurately see the people they are elected to represent.

Deirdre Sugiuchi is finishing her fundamentalist Christian boot camp memoir Unreformed. Sugiuchi’s work has been featured in Electric Literature, Guernica, the Rumpus, and other places. She lives in Athens, GA with her husband and son, where she curates the New Town Revue music and literature series. She’s also a public school librarian.

The 2018 session of the Georgia General Assembly didn’t bring a $15 minimum wage, a hate crimes bill or any gun control, […]

The 2018 legislative session of the Georgia General Assembly is almost over, but we need you to keep calling. There’s still terrible […]