The University of Georgia was built in large part by enslaved people. For most of its history it excluded people of color. Still today, it bans undocumented Georgian students. Still today, it refuses to adequately deal with its history of white supremacy. And still today, it disproportionately pays its Black Athenian employees wages that prey upon their economic vulnerability and hinder their ability to build economic security. It’s time for UGA to step up and combat systemic racism, instead of furthering it.

Yet when right-wing operatives set off their white anxiety alarms after a UGA graduate student and teaching assistant mentions the imposing obstacles that have stood in the way of Black progress on his personal social media, the University responds with a statement catering to their agenda and the whims of wealthy donors instead of defending their workers’ free speech rights. The attack comes after Campus Reform got a hold of some of A4E member and UGA student and worker Irami Osei-Frimpong’s Facebook and Twitter comments, including his statement that “some white people may have to die for black communities to be whole in this struggle to advance freedom.”

Campus Reform’s followers have been busy in the days since encouraging others to threaten to withhold donations from UGA. In response, despite their written policy that “University Faculty are free from institutional censorship, discipline, or reprisal affecting their professional careers for exercising freedom of expression,” UGA released a statement saying “The University has been vigorously exploring all legal options. Racism has no place on our campus, and we condemn the advocacy or suggestion of violence in any form. We are seeking guidance from the Office of the Attorney General as to what actions we can legally consider in accordance with the First Amendment.”

Free speech is the condition that has allowed all other progressive movements to flourish, and it shouldn’t be calibrated to donors’ sense of racial panic. UGA should be addressing its past and present contributions to real systemic racism in this country, not chasing the tails of organizations who profit off of outrage and anxiety at imagined anti-white racism. To be clear and obvious, there is no system of racial oppression in this country that systematically excludes people from economic security and incarcerates them en masse because of their white skin.

Finally, the idea that Black progress has always met violent opposition in America is far from outlandish; it’s obviously true. It took the Civil War to end slavery and the Civil Rights Movement faced white supremacist terrorism at every turn. These historical realities make it reasonable to suggest that those who benefit from the current racial caste system of economic exclusion and mass incarceration might not simply give way via a sudden change of heart. Osei-Frimpong isn’t advocating violence; he’s acknowledging history.

A4E supports free speech for campus workers and we call on UGA to take action to counter white supremacy, instead of catering to it and its donor allies. Listen to the community, and its needs for truth and reconciliation, immigrant inclusion, and fair wages. UGA can do better. It can be a leader in building a just future. It should embrace that promise and that responsibility. 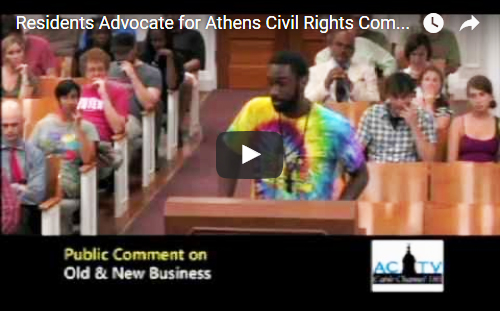